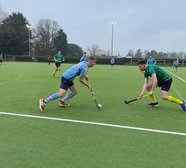 Check out all the results and match reports from this weekends hockey at Broxbourne HC.

Broxbourne have been back to hockey after the Xmas break.

Last weekend the Ladies 2s had a rearranged game, and the Mens 1s had a friendly, before the league started up again on the 15th

Ladies 2s
Some lovely play from a Broxbourne team carrying the full extent of a Xmas break with them resulted in 3 beautifully executed team goals against top of the league.

The first one came from a string of passes around the back, up the right and crossed into Rosie on the P-spot, who had the goal initially denied by a well positioned defender's leg on the line. Rosie stepped up to the penalty flick and convincingly placed it past the Bishop Stortford goalkeeper to claim the goal.
A deflection on the post by Jess from a reverse stick shot Rosie managed to get away at the top of the D gave Broxbourne their second goal.
After a hustle with the goal keeper on the post, Cerys put away our 3rd goal in a short corner.

Some quick legs and good attacking on the turnover unfortunately let Bishops Storford claim 4 goals throughout the game and take away the 3 points.

Mens 1s played a friendly away against Potters Bar which resulted in a close win for Broxbourne in the 11-goal game. Goals for Stan (3), Toby (1) and Sam (2) made the final score 6-5.

After the long Christmas break the Brox Mens 4s traveled to Letchworth with the hope of producing a strong performance to build on for the rest of the season.

With a bare 11, and no training sessions since the last league game, the challenge was a particularly significant one. Unfortunately, an early goal for Letchworth put Broxbourne on the back foot and sadly a recovery never materialised.

Incredibly, Letchworth went on to score 4 more goals from consecutive short-corners. In fact, it would have been 5 had Letchworth ensured that the ball had left the D before firing it into the goal.

Still, there were certainly positive and encouraging moments to be taken from the game. The Letchworth keeper was forced into a couple of good saves and, with a bit more composure, some fantastic opportunities could certainly have been converted.

It's also important to not lose sight of the age of some of the players in the Mens 4s this season, along with the inexperience in respect of a large proportion, who are continually facing superior opposition yet consistently surpass what is expected of them.

Mens 3s
On a cold but surprisingly not frosty morning the Broxbourne mens 3s started off the day at the Badger Field with a convincing 7-1 win over Vauxhall. Starting Saturday morning off with a 12-strong squad the M3s were incredibly happy to have more than 11, but after pulling some strings which included flying players in from Sri Lanker they finished the game with 3 on the bench!

Vauxhall started off strong and put the Broxbourne team under pressure through the first 15 minutes of the game, with opportunities at both ends. Vauxhall managed to capitalize on this end-to-end play first and went 1-0 up. As the Broxbourne team settled they managed to win a series of short corners and 2 goals to put them just 2-1 up at half time.

The second half saw Broxbourne dominating the play and scored a run of goals which included:
- Kitch ‘tap tap’ around the keeper to roll the ball into the goal
- KP reverse shot that shocked everyone that it was on target that even the GK missed it
- Stu leathered the ball into the D to get the assist on a goal scored from the lightest of deflections from Kitch
- Kitch reverse stick shot which accidently made it into the goal

Summary of the game from the clubhouse after the game was “Scotty made a few decisions, Brox scored a few goals.” A prediction from club chairman at the half time team talk that the new tactics would win the 4 goals in the first 10 mins of the second half was so successful he left the pitch to buy lottery tickets as soon as the game was over!

Mens 2s
Traveled away to Letchworth where they managed to get 2 goals, one from Browny who’s beautiful mis-hit fooled the keeper and bounced into the back of the goal. Jack Price also managed to pick up his first goal of the season from a Cranners assist. This unfortunately was not enough because despite Joe in goal winning man of the match, they conceded 3 to leave the final score 3-2 to Letchworth.

With our Brox M4s playing straight afterwards there were thoughts to stick around and cheer them on in Letchworth, but after they went 3-0 down by half time, the M2s bailed back to the clubhouse for a beer.

Mens 1s
After conceding early in the game, the Broxbourne team managed to get themselves a goal to bring the scores level at the half time break. Unfortunately the Letchworth yellow were too strong in the second half and took the 3-points in a 5-1 win.

Ladies 2s
The ladies 2s started the game in high spirits with the luxury of 2 on the bench to start the game and a super crowd cheering on their home advantage. Unfortunately this did not last long, after Charlie decided to pass the ball to their center forward who took full advantage by putting the visitors 1-0 up. The game was well fought and an equaliser came just after half time when an intentional foul in the D granted Broxbourne a penalty flick. Captain Rosie stepped up to the challenge after her successful flick performance so far this year to once again put the ball convincingly into the back of the net making her social media following go crazy! Despite the extra effort put in by all the Broxbourne players, including Georgia whose effort included throwing herself to the floor on multiple occasions, and the two subs deciding they had enough and left the team on a bare 11 for most of the second half, Broxbourne were unable to hold their lead and Saffron Walden managed to get the 2-1 win.

Ladies 3s
Ladies 3xi take the win in the derby

With the absence of illustrious Captian Lauren this week, the threes were under experienced direction of Sharon.

Despite a later start and the change of location to Queenswood, the team arrived in ample time (notable Emma, who was first to arrive after diverting to Pets at Home and once alone in the orchard, eager for the team to rescue her!)

The early arrival also provided a new learning experience for Lydia, who learned the post term for club house… ‘pavillion’.

With the return of some familiar faces and some making their debuts, the team were quick off the mark and had the majority of possession. Broxbourne were dominant and the teamwork on display was a sight to behold and able to outplay the opposition, working the ball forward out of some well pressed areas.

Kelly, Hannah and Ella showed their speed on the break and fed the ball wonderfully in to the D. This week, the scoresheet belonged to Lydia with two fantastic goals and the perfect end to some team drives up the pitch into the attacking half. The solid defensive skills from Rose, supported by the three defenders at the back, gave Hertford little chance of approaching Broxbourne’s goal and left Emma thankfully with very little to do.

The game ended prematurely for two players, firstly Kelly, who in the midst of her outstanding attacking runs, was stopped in her tracks by a ball to the knee. Helpfully Kevin was offering advice on injury treatment on the far side, to which Kelly politely declined and Hannah Fix who spent the majority of the time on the floor (despite having the family watching) and required the umpire to help her with cramp!

Despite finishing with ten players, it was all 12 that worked together to get a well deserved win and start 2022 in style.

Thank you to the supporters for braving the cold (or watching from the lighthouse).

Next week the 3xi are at home to Welwyn and hope to continue their winning ways.

Ladies 4s
Is it a bird? Is it a plane? No it’s just the central defenders hit out hurtling through the air!

Having Made the most of their Christmas holidays with plenty of food and drink, the break certainly had taken its toll on the Ladies 4xi and it did show in this week’s fixtures.

They began the first 10 minutes finding their feet, but soon got into the swing of the game. If truth be told, the prospect of a possible cancelled match,due to the temperatures and fog, probably did impact the excitement on display for the match as many would possibly have preferred bed!

Despite a number of chances and the majority of play, Broxbourne just couldn’t find their form in front of goal.

But in true 4s fashion, they battled on. With some out of this world passes from the back from Frankie, which had even the opposition diving for cover from, the team continued to press and have their opportunities.

A number of unlucky near misses, finally led us to break to deadlock when both attackers, goalie and defenders were shocked the ball wasn’t in and had assumed it was going out (the fog must have clouded their judgement) only for Hannah to smash it into the goal from the far left corner. Quote of the day from Fixy was…‘I had no idea till I heard it hit the board!’.

It is important to mention the opposition, who put up a fantastic fight and displayed some lovely plays, which at times caught Broxbourne off-guard. Thankfully, there was no need to worry as Georgia was on hand to propel the ball out of the D.

We look forward to a home fixture next week and to build upon this week to hopefully, find the form we displayed before Christmas.

Ladies 5s
The Ladies 5s started off well with some beautiful passing and series of play which resulted in a well deserved goal from 1-2 passes between Sarah and Sharon, who got the assist by putting the ball into the D for Zara to finish off well and put past the keeper. This was celebrated with high-fives all round! Unfortunately Stevenage didn’t seem to like this and proceeded to use their youthful legs to score 4 goals and force many more excellent saves from Chantil in goal. Final score, 4-1 to Stevenage.

Ladies 1s did not play this week, they look forward to returning to Saturday hockey with a friendly next week.

Junior training has started up again on Sunday mornings, and look forward to their first round of matches this coming Sunday 23rd Jan.

What’s coming up this week: